In non-agricultural nomadic forager societies, food needed to be found, gathered and hunted down. With the invention of agriculture, whether farming crops, pastoralism aka animal husbandry, or pastoral farming, food became for the first time seasonably and punctually available.
We have come a long way. Food production has been optimized. Obtaining food is no longer dangerous nor is it time-consuming, bar a queue at the cash register. From a vulnerable resource, contingent on climatic, social and political conditions, food has become, for us in the western and/or affluent world a continuously available asset. From coveted to wonted. From particular to ordinary.

Food is foremost nutrition. Energy. Fuel. But it has evolved into more than that. Food is taste. It is a gathering, a pleasure, an adventure, a distinction. The realm of cooks and celebrity chefs, of gourmets and gourmands. Object of fashion and fad, of restriction and restraint. From a basic need, food has become a topic of indulgence, an enjoyment on the verge of guilt and delight. And for many, food is a problematic subject, an issue that needs to be managed.

Food science
For many years, the relationship humans have had with food centered around nourishment. And nutritional value based itself on calorie focused thinking. Calorie equivalency, now discarded as a fallacy – a calorie is not a calorie, each calorie producing different biological effects – seems even to have exacerbated the obesity epidemic and other food-related ailments. Food, scientifically dissected, analyzed and examined now holds, even is, the key to health. Thus, the corpulence debate has distanced itself from the health-scare debate.

Fat can be fit.

Obsessed with body image, obsessed with nutrition.
Body politics see the human, mostly female body, as a political battleground with the powers that be dictating the rules and regulations of what is the accepted norm and what is not. Initially strongly involved in the fight against the objectification of the female body, body politics emphasises women’s power and authority over her own body, tackling topics such as abortion, reproductive rights, but also violence, racial issues, body shape and presentation.

To shave or not to shave

But despite the ongoing debate, the body, male and female, still suffers from its image-dictates. More than ever, the body is an index with thin and fat at its two extremes. I am my body, I chose my body, I suffer my body.
And suffer many do.
We have seen them. The anorexic skeletons of girls, so pretty when they were still eating. Bulimic royals and celebs, stuffing their faces out of the lime light. Morbidly obese men, prisoners of their reinforced beds, hoisted to hospital for treatment. The biggest losers, shaking their excessive skin in front of the camera.
But what about Tom, Dick and Harriet?
Apparently they too suffer the plights of chewing the chow. Tom is a Zombie Eater turning himself into a soulless corpse that at night ravages the fridge for cold left overs. Unlike Dick who suffers from NES, Night Eating Syndrome, making him too eat at night, but consciously so. Harriet is a detox junkie, addicted to fruit and vegetables juices. Her friend Mary hides when eating certain foods, keeping wrappers and containers and evidence safely out of sight. And Livia? She fasts. Compulsively. Like a hermit, a buddhist monk, a new Saint Catherine of Siena, less a spiritual than a bodily denial of self.
Denial. The key issue. Yet some appetites never cease. Chocolate you think? Think again. Soil, starch, glass, rocks, paint, clay, hair, wool, wood, urine, faeces, ice, paper. The yearning for non-nutritive substances.
Whether caused by mineral deficiencies, obsessive-compulsive or developmental disorders, pica, from the latin word for magpie, the bird who eats everything, is more common than we care to believe. You Tube will vouch for that. Trichophagia. Pagophagia. Xylophagia. Or the more ordinary ‘eating toilet paper’. A disorder? Yes. But an intriguing one to say the least. 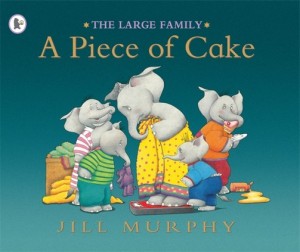 When Mrs. Large, the cuddly mummy in Jill Murphy’s book series ‘The Large Family’, decides she is fat, her family responds with indignation. And fear. No more cake, no more biscuits and no more crisps sounds too ominous for the family. Unattainable.
“You are just right,” her children retort while only the baby mentions his mother’s wobbly bits.
The innocence of the rug rat?
Elephants are of course supposed to be fat and even Mrs. Large, at the end of the story has to concede.

We are not elephants. We are Homo sapiens. Wise men and women. Omnivores. Devourers of everything.
Most of the time. According to the times.
Pre-conditioned, free or enslaved, rich or poor, humans are hungry creatures. Greedy for knowledge, craving love. We need. We desire. We want to be, to lead, to belong. And we fight for our longings.
With or without wobbly bits.